December 22nd 2007, Hiroyasu Shimizu was cut his left foot by the other blade of his skate in the warmup time before the game of the 34th all Japan Ssprint Speed Skating Championship in Kushiro Hokkaido. But he got overall 3rd place after the injury sewn seven stitches and he will join the World Sprint Speedskating Championship of March 2008.

Not a good new year for Matthias Schwiert fron team Zepto/Bont. He is in hospital with a 10cm cut through his leg which went through 2 tendons and an artery after a bad crash on the ice.
The horror accident came to the ice high-speed skater in the training: Matthias Schwierz (24), the best Sprinter of Berlin, crashed into the gang of an external curve with speed 55 km/h, and cut through himself thereby two chords at the foot and an Artery!
Bont Skates Message Board and News: Happy New Year
BZ-Berlin.de: Skid cut through Arterie

There were bitter news yesterday for Matthias Schwierz. The 23-year-old, both in speed skating and speed skating in the German head counts must order his career as athletes fear. A few days before the beginning of this year, rebounded the hamlet of Bacher at the speed skating Traininf in Berlin against the gang. A fall with consequences. He cut with the left skate into the right Sprungelenk. Two tendons and an artery were injured. Schwierz was still operates in the evening. But yesterday, did it a serious setback.

Matthias, how are you two weeks after the heavy fall?
By midday yesterday, I was still very good. But now I correct on the ground. I am in the right foot still without feeling. Schwenninger The doctor in the hospital said yesterday that a main nerve completely by. Now, do I have as quickly as possible to decide whether I will be operated on again.
What opportunities?
That is questionable. It may be that the nerve no longer 100prozentig together. Normally, for a person not a very big problem. But as speed skaters and speed skaters I need to feel in the foot. Moreover, it may be that the nerve at this point only connect again, if you somewhere else takes a piece and then inserted, possibly because the ends after the crack is too short.
How did the surgery on artery and tendon in the right ankle?
Quite well. It's all healed again. I wear a plaster at present and should actually six week break. That would be for me, no problem. I was convinced that I will soon return to the training can begin. But yesterday's news, the situation has radically changed. Now, it really hit me.
Is it only the possibility of a renewed operation?
Natrülich I will try to circumvent and will also once again the Speed Skating Association physician contact. However, it is very unlikely that the nerve by itself together again. Therefore, the surgery is the only chance to get back to real competitive sport.
My big dream was always the years passed participation as speed skaters at the Winter Olympics in 2010. Is this dream of now?
That I will not now think. My dream now is to first of all, that the nerve back together again and I really competitive sport can do.
How big is in such bad news at all, nor the motivation to speed skating?
The will is there. Until yesterday, I was like I am also sure that I will come back. But I am now of course very depressed and everything must now cope with yet.

by Andrew Love
When I see friends crash, in pain, or have bad races, I often question if I should publish the footage I have.

Kip Carpenter opened nationals up with quite a horrifying crash, and Richard Gregersen got a GREAT video angle of from the stands. Kip didn’t mind it being published, so it leads off the video. Thanks Richard!

Kip cut his ankle pretty badly in the crash, and had to have stitches. When I mentioned that I had this pic, people wanted to see it, so here it is, with the expert hands of Dr. Eric Heiden sewing & stapling it up.
Zen and the Art of Speedskating: USA Sprint Nationals - video (Jan. 5, 2008) 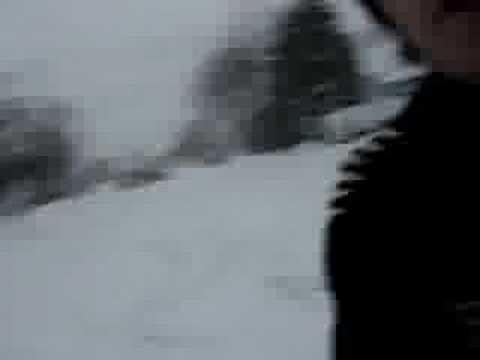